World Novelty Went on a Journey

Liezen, September 2014. With a spectacular special transport a world novelty left the works of Maschinenfabrik Liezen in the night from September 09 to 10.

A special multi-axle flat-bed lorry transported the new rail milling train HPM VM141 "Hornet" to Berlin where it is currently presented to the experts at Innotrans (Septemer 23-26, 2014).

The "Hornet" consists of the elements milling train, guide car and system car engineered and manufactured in the course of our joint venture with VOSSLOH Rail Services.

Replacing the common grinding process by a milling process in the finishing module developed to this purpose is only one of the special features this multi-talent has to offer. This makes the HPM VM141 an absolute innovation showing once again the paramount know-how of MFL engineers and technicians.

Finishing the complete project is expected to take place in the end of 2015/beginning of 2016. 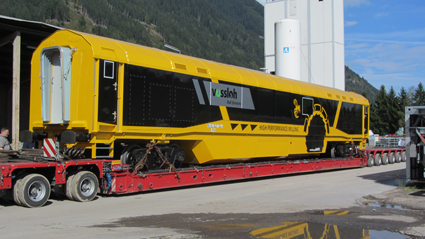 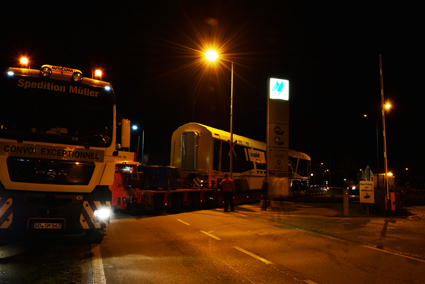